Cannon Pest Management’s technicians are qualified and licensed to carry out possum exclusion and pest removal for Melbourne residents and businesses. We do not relocate possums from your property, relocating possums is both illegal and inhumane. Thanks to our comprehensive and reliable methods for possum removal and exclusion, home and business owners can turn to us to ensure the integrity of their roofs, guttering, and related structures. 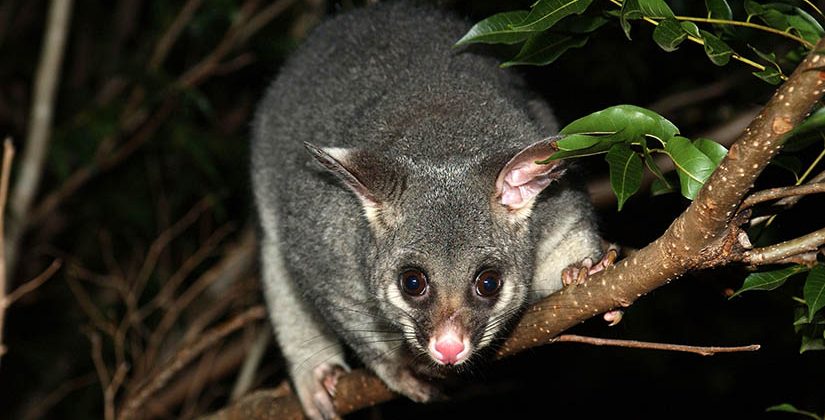 There are two types of possums in urban areas;

The common brushtail possum, (Trichosurus vulpecula) is about the size of a cat. It has large pointed ears, grey fur and a bushy black tail. Brushtail possums have a single young born in autumn or spring. The baby spends around six months in the pouch, one to two months riding on its mother’s back until it is weaned and leaves the maternal den at between 7–16 months.

The common ringtail possum, (Pseudocheirus peregrinus) is much smaller, about half the size of a cat. They have round ears, a grey back with rusty sides and a curled tail with a white tip. They have one to three young, mostly twins, born during autumn or winter. Ringtail possums usually build a nest of twigs and leaves called a drey, several metres above the ground. They rarely enter house roofs.

Cannon Pest Management have the experience, knowledge, and relevant certifications to deliver outstanding and prompt possum removal services. We provide possum control in Blackburn, Burwood, Croydon, Glen Waverley, Heathmont, Ringwood, Vermont, Wantirna and Melbourne Eastern Suburbs. Home and business owners can trust us to assist them with their possum issues.

Pest Problems? Get In Touch!

Send us a message with your pest control needs and we'll give you a call to answer any questions and arrange a booking.

Our regular clients know our commitment to being available whenever we’re needed and reputation for high quality, reliable work that lasts long after we leave. See what customers are saying about our Melbourne pest control services and why Melbourne locals recommend us.

Sean is very professional and friendly. I use Cannon pest management every 18 months for my house. I’m very happy with Sean’s work. Thank you.

Have a possum problem at your home or business premises? No doubt you have some questions! Here are the most common possum questions people ask our Melbourne pest control experts.

Why can’t possums be relocated?

Government research shows that a high percentage of relocated possums will die. They become very susceptible to attack from predators when in an unfamiliar environment. They may die from stress and also by being run over by vehicle while searching for a home. See this Government study for more information.

Do you fix the possum entry holes?

Yes, fixing the possum entry holes is the only way to exclude possums from your roof. Possums removed from your building must be released on the same property they’re trapped. Possums will come back and continue to test the exclusion repair work and look for new entry locations. Once possums realise they can’t get back in they will move on.

What damage can they do in my home?

Possums can cause extensive damage if left unattended within the voids of your building. Possum urine stains will be present everywhere they’re active inside the building. This can stain your plaster ceiling and spoil ceiling insulation. The longer possums are left inside your building the odour of possum urine and poo will become so strong that it can’t be removed. Possum gnaw through plaster walls, electrical wiring and gnaw larger opening in the building structure to make a suitable entry hole.

How much does it cost to get possums out?

This depends on the building structure, the type and amount of possum entry locations that need to be repaired. If we have to engage other professional trades people the work will be more expensive.

What can I do about possums on top of my roof?

Do electronic deterrents or chemicals keep possums away?

Chemical odour deterrents will have a short-term impact and will require reapplication very regularly. Possums may not like certain odours but they know that your roof space is warm, dry and safe from predators and they will tolerate a lot of disturbance.

Electronic or ultrasonic devices with strobe lights (flashing light) will have impact on possum activity in a very small area where the device is located and within a direct line of sight. To impact possum activity in a large area you will need several of these devices. Our experience is that the flashing light on a sensor has greater impact on possum behaviour then the ultrasonic sounds. You may create more disturbance of your neighbours’ then you do to possum behaviour.

Yes, and they will most likely die within your roof. It is very important to possum proof your roof space before placing any rodent baits or rodent baits should be placed within secure rodent bait stations to prevent possums eating the baits. We can provide an effective rodent treatment if we find that you have both possums and rodents living inside your roof space.